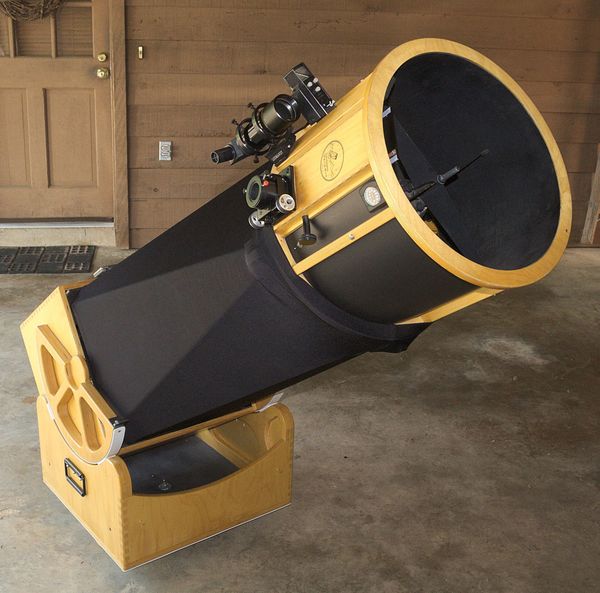 This is a 2003-era TeleKit, built around optics from a Sky-Designs "VPT" Dobsonian, with a mirror made by Danny Arthur. I have no performance specs on it, but have never been disappointed nor had any reason to doubt its quality. Danny wasn't able to provide any numbers from his notes, but said this on Cloudy Nights: "This mirror was made in February of 1992 and I must have really liked it because I noted in my records Butefull!!" (https://www.cloudynights.com/topic/5595 ... rror-edge/).

Built from HVHC Baltic Birch plywood with finger joints on all corners and sides. If you've ever seen a TeleKit, you know how beautiful and strong they are.
Extras / accessories
I've tweaked a few things over the years but all changes be reversed back to the original design ...however you probably don't want to...

I still have all the hardware I changed or replaced and will include that with the scope. I replaced the roller-bearing altitude and azimuth bearings with properly sized and positioned Teflon pads riding against "FRP" board.

Why do I want to sell it? Well, I don't entirely want to sell it but due to vehicle changes and other reasons, I'm looking to downsize a bit. The scope is used, but definitely not abused. You'll see signs of normal use, but that's all. If it were in spotless mint condition, it would be priced accordingly. It's a premium design still in good condition, but it's not in "never-touched-new-out-of-the-box" shape.

I don't want to ship this scope. I'm located in Pineville (Alexandria) and am willing to meet the buyer within a ~300 mile radius. I'll be taking it to the Texas Star Party in May, so if you're going it'll be available to examine, try out and take home with you.

Sorry, I'm not setup to receive PayPal - Cash or cashier's check only

Return to “For Sale”